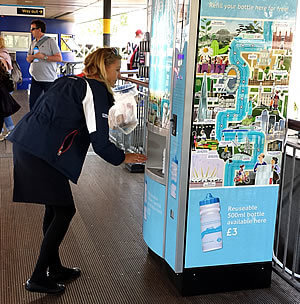 HydraChill Water Refilling Stations have been installed at both piers, offering London River Services passengers a free refill for all water bottles and were quickly followed by a similar facility at Embankment.

For those without a bottle, the machines also offer a souvenir reusable container, sales revenue from which will help fund the free water provision.

The River Thames is both an iconic symbol of London and an integral part of its transport network. The river offers TfL commuters and tourists some of London’s best views, passing through the heart of the city and many famous landmarks. The HydraChill stations are aimed at improving facilities and travel experience for LRS rapidly growing passenger numbers, with 12 million river passenger journeys forecast by 2020.