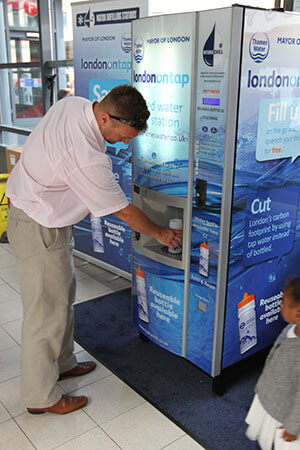 The challenge to improve 'On the Go' access to free drinking water has been helped take a landmark step-forward, courtesy of HydraChill Ltd.

For the first time, anywhere in the UK (and possibly further) thirsty commuters have been able to refill their drink containers with free chilled and filtered mains-water thanks to the initiative supported by Thames Water and Transport for London and sanctioned by the Mayor Of London.

Commuters at Hammersmith Bus Station, including users of Hammersmith Tube, can now get access to free chilled, filtered mains water instead of having to buy bottled water.

The solution is provided by a HydraChill Water Refilling Station, a unique UK invention where consumers can hygienically refill their drink containers with chilled, filtered mains-water and consume on the go.

If commuters do not have a bottle available, the refilling unit dispenses an empty 500ml reusable bottle (£2) which can then be filled up. The recyclable bottles carry a request to help cut London's carbon footprint by refilling with tap water.

While the Hammersmith project has been under consideration, Hydrachill machines have established their popularity and durability in a range of trial locations around the UK including Universities, Museums and Fitness Centres.

"The focus on mains water as a healthier, more environmental option grows exponentially. What’s less optional is free available public access. HydraChill was born from frustration at lack of ‘on the go’ water availability. With support we have the potential to help make a significant impact, there are so many positive messages associated with this project. Ultimately it’s about choice and the consumer’s entitlement to hygienic mains-fed alternatives, for the betterment of their own health and their environment’s. Transport hubs are a logical progression point."

Thames Water sustainability advisor, Pavan Badesha, said: "We're proud that London and the Thames Valley has some of the best quality drinking water in the country and it’s great that schemes like this one are making it more readily available. Reducing the need to buy a new bottle every time we want a drink of water is a very positive step for our environment too at a time when we should all be thinking about how we can do our bit."

Mike Weston, TfL's Director of Buses, said: “We’re constantly looking at ways to improve our customers experience whilst travelling on our network. As part of that, we have worked with Hydrachill and Thames Water to install a mains drinking water unit at Hammersmith Bus Station to keep customers refreshed during their commute."