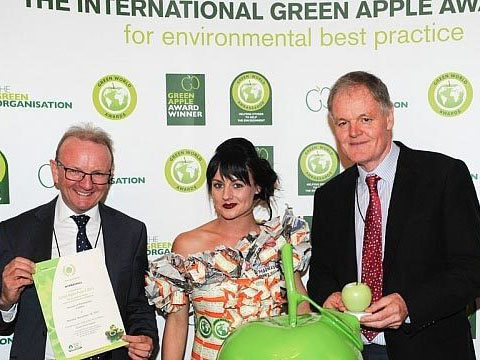 We are pleased to announce that our efforts to improve access to free drinking water and reduce waste and emissions has been rewarded with a double award at the Houses of Parliament. In a special presentation ceremony at the Houses of Commons, HydraChill Ltd has been presented with an International Green Apple Environment Award and further honoured as International Green World Ambassadors for 2016.

As a result of the awards, details on the HydraChill project will be published in The Green Book, the world's only annual work of reference on environmental best practice, distributed to environmental bodies and professionals around the world by The Green Organisation.

The Hydrachill project also goes forward for further judging and the possibility of representing the UK in the Brussels-led European Business Awards for the Environment. In their assessment the award judges recognised that Hydrachill Ltd has developed a unique and original solution.

"Conceived under the "Water for Health" initiative, the Hydrachill Water Refilling Station was born of frustration at lack of access to hygienic mains-fed drinking water for on-the-go consumers. Purchasing bottled water was typically the only option. This inspired them to provide a free and innovative alternative to costly bottled water in high footfall areas Their customisable HydraChill Water Refilling Stations provide hygienic chilled and filtered drinking water and also vend optional reusable bottles, generating revenue to help fund free water provision and help reduce waste and emissions. Not only do disposable plastic bottles raise serious environmental concerns, but UK mains-fed water is of a high quality and is fed by a carbon efficient system utilised imaginatively by this company."

To coincide with the award HydraChill Ltd has also confirmed that two of their pioneering refilling units at Northumbria University's Sports Central complex have broken the one million water uses barrier in less than five years, effectively saving the centre a million plastic bottles from litter and landfill. Demonstrating such high-demand reliability at other education, museum and high footfall locations led to HydraChill machines being installed at Transport for London's Hammersmith station and Tower and Westminster piers in 2015. These units represent the first ever free drinking water provision at major UK transport centres and are proving popular with commuters, staff and tourists.

All at Hydrachill Ltd are clealry delighted with these awards but recognise that much remains to be achieved. Whilst HydraChill has proved conclusively that consumers readily choose free and hygienic access to mains-fed drinking water outside the home where made available, the objective remains to have such hydration provision become the rule rather than the exception in prime and convenient on-the-go locations.

You've reached the end of our news page.